Last week I said my motivation was back and I was in a better place emotionally for healthy eating again. Well, this week my weight loss not only stalled but reversed and I saw a 1lb gain on the scales. I wasn’t surprised, I’ve been eating like I used to basically, I’ve felt hungry so I’ve eaten, a lot. I’ve overeaten at meal times and snacked between.

I think the reason I’ve been eating so much is that, with it being the run up to Christmas, I’m more stressed than I realise so I can only hope that after the big day I’ll be more in control of my munching again. I’m pleased to say I haven’t been turning to chocolate though. While I have had some, I’ve not binged on it like I used to before I gave the Thinking Slimmer Chocoholic Pod a go. I really should start listening to their Christmas Pod, I imagine that will help me not stuff myself silly over the festive season.

Having said that, I don’t want to get too hung up on losing weight, especially not during a time when food is so important. I’ve said before that I still want to enjoy my food and the socialising that can go with it, and that remains true. So I will not be beating myself up for this gain, it was only a little one anyway and we’re all allowed a little blip every now and again.

I will be weighing in next week, mainly because if I stop weighing in I know I’ll just throw in the towel completely and I don’t want to do that. My journey to a healthier me will be continuing into the New Year too, if I can find a safe way to pack my scales when we go on holiday! 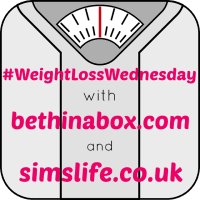