From the 21st to the 25th of August the roads between Paris and Brest fill with cyclists in all manner of pedal powered vehicles as they attempt to get from Paris to Brest, and back again, in under 90 hours. It’s not my idea of fun, but I tell you something for nothing; it’s cracking to watch!

The event that brings cyclists from all over the world here is the PBP, or Paris-Brest-Paris randonneur, and not only pre-dates the Tour de France, but also inspired it! 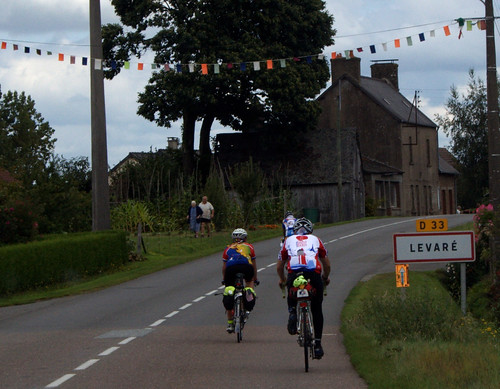 I’m lucky enough to live almost slap-bang in the middle of the course so we see a lot of cyclists when it’s going on, in fact we get stuck behind them when going anywhere! But I don’t mind, mainly because it’s an excuse to whip my camera out! 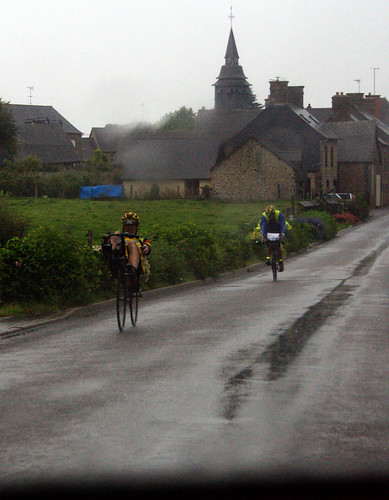 Sadly the cyclists had to put up with some rather terrible weather this year, although apparently the last one (2007) had some of the worst weather ever! But the poor peddlers did get caught in torrential rain and a thunderstorm on the 22nd. The thunderstorm was actually so bad that we lost all electricity for several hours at home, so you can imagine the winds and rain they were cycling through!

Something that you can’t help but notice if you’re driving through the villages while it’s on, though, is the great community spirit. Bunting is hung out, posters supporting local riders go up, houses open their doors to riders who need a toilet, a drink or a sit down. People come out into the street to cheer them on, even in said torrential rain, and stand out serving them drinks at the pit stops. People are proud.

I suppose that’s the key thing I like about France; community. It’s something the majority of England lost long ago, it went out with street parties and caring for your neighbours. But it lives on here and it’s lovely. It’s really lovely that people care.

If you fancy perusing some of the photos from the Fougeres/Gorron leg I’ve put mine up on my PBP flickr set, more will be added as my internet permits!